How To Speed Up Android Phone – Top 10 Tips [Improve Performance]

Sluggish Android Phone? know How to Speed Up the Android Phone easily with our following tips. The Android Phones or Tablets might hang when you used that for quite some time. The issues like Android Animation will take long time, contacts will not be shown immediately,  the phone dialer app might hang.

We know that new Smartphones and computers will give the best performance and speed. After the month of use, the performance of the System will slow down gradually. It’s because of the non-maintenance and having too much of applications. Android phones are also not exemption in this case, you have to maintain your Android phone to get the good speed and Performance.

If not dramatically but significantly, you can improve the Speed and the performance of the Android Phone. There are many Apps out there in the Play Store to rescue your Hanging Smartphone. We’ve also shared some best Android cleaner Apps in our previous Post.

Here, I’ll show you, How to get the best performance and increase the Speed from your Android devices with ease. By using the following tips, you can increase the speed of Android phone without rooting. You can use these tips speed up Oreo, Lollipop, Marshmallow, Nougat, Kitkat Android Phones. Also, You use this tips and tricks to improve the speed of Samsung, Motorola, Huawei, Lenovo or any other Android Phones.

See Also: Get First Day Performance and Smoothness of Your Android Again with Greenify!

Top 10 Ways to Speed Up an Android Phone and Tablet

1. Monitor the Apps and Find Issues

The first step to find the solutions for any problem is that, You have to identify the Issues.  Mobile Data, Wifi Usage Monitor and GPS Load, RAM Usage and More.

2. Clean up the App Cache and Space 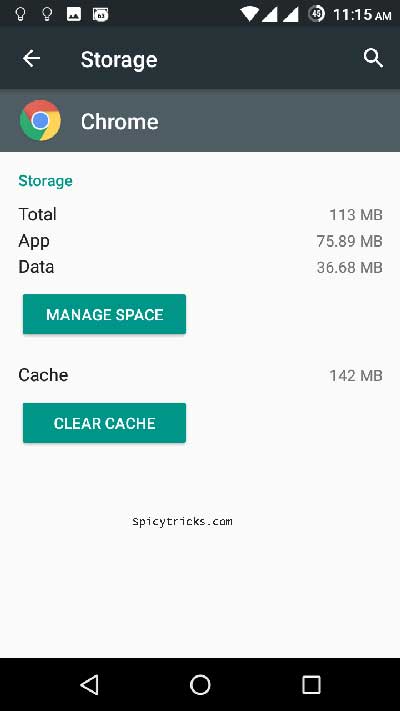 All Android Apps that will write their data in the App cache memory and use your system resources quite often and will slow down your Android phone. You can avoid this by clearing app cache in the settings of each app. However, if you have many apps, that will take time to clear your App cache manually.

Over the time, you may have downloaded more files via your Browser like documents, images, Audio and video Files. Those files are downloaded and stored in Downloads folder. If you don’t clean up the unnecessary files in the Downloads folder, that will consume part of the storage space of your Phone.

To remove the files in Downloads folder

You can use App cache cleaner to remove those files from Android system easily with one click. Here, we have previously written about the Best 5 Apps to Clean & Optimize to Increase the speed of Android Phones. Use those apps to clean app cache , unused files, residual files, search history and uninstalling apps. It can do more than you think.

Apps makes the smartphone even smarter. While having too many apps will kill your System resources when the phone has low storage Space. Also most of the apps will run in the background and access the valuable CPU cycles and processes always. Many background processes, certainly will slow down your Android Phone. Regain the Speed of Android phone again, by uninstalling the Unused Apps.

4. Remove the Adware, bloatware and Malware

Like Windows Operating system, Android is so popular in smartphone Industry. Because of these popularity and millions of apps in the Play store, Android is vulnerable to many security threats. The Attractive free apps might have install adware and even malware in your Android phone. Also, By default many apps installed by in your Phone by Phone Manufacturer in the name of System Apps. You can’t uninstall those company sponsored android apps. But, You can disable and clean those unwanted Android system apps.

Basically, It’s not a system app, those crappy apps are installed in system apps folder by the Android Phone Manufacturers. By doing this, You can increase the speed and performance of Android phone easily.

The annoying Adware will use your valuable system resources to show the irritating ads in the home screen. To remove that you have to secure your Android phone with Mobile Antivirus Apps. Many Free yet best Security and Antivirus Apps are available in Play store. Just install the Android Antivirus apps and remove those craps from your phone. 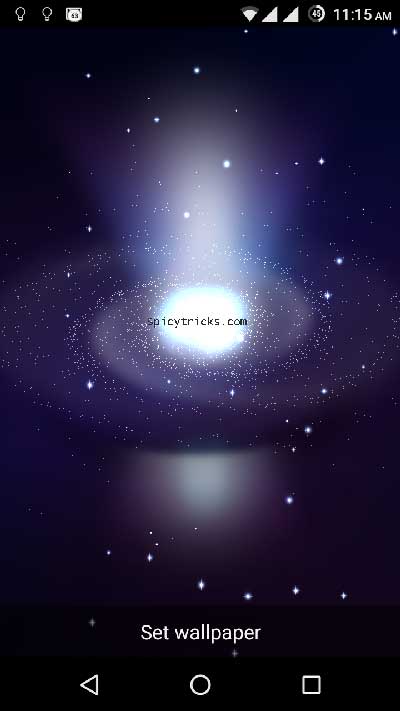 Just install the App launcher for shortcuts and remove those shortcuts. Also, the Widgets too have eaten your memory resources, so try to remove the unnecessary widgets from your Android home screen. It will give you some amount of space and resources to speed up the Android phone further.

First try to know the Capacity of your device, then graphics intensive apps. If you have low end Android smartphone, please avoid using the live wallpapers to speed up the android phone

6. Turn off the Wireless Data connectivity when not needed

Many Internet apps like Gmail, Facebook will always connect with Internet and using your data resources regularly. All that syncing will slow down your system and drain your battery power. Simply turn off the data usage and preserve some resources to gain the performance. 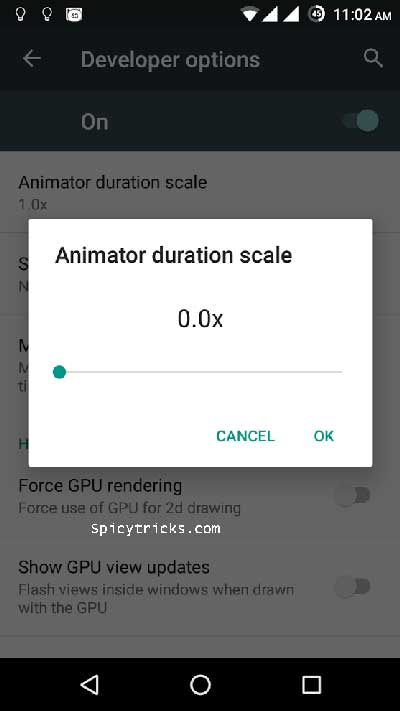 Android Operating system has added many graphics oriented animation when they launched Lollipop using material design. They have improved a performance and added a few more animations in Marshmallow too. However, if You have Minimum RAM Memory then these animations will slow down your Android Phone. The phone will hang when you launch the any app for some time when performing these animations.

Then, How to disable these Android Animations?  To do that, You should enable Android Developer Options in your Phone.

For this in Your Phone

It will enable the Developer options in your phone. Then search for animations using the search box above. There You can set the animation delay or disable the animation.

8. Close the Recent Apps and Free up Some RAM

Android Operating System has been developed with many features over the year. If your Android device is running Android 7.0+, you can use the Recent Apps list to enable Multi-Window mode. However if you have the lower end phone and want to use multi-tasking, it may significantly affect the Phone Performance.

To avoid the that clear your Recent Apps list to gain some more performance from your phone. Also clearing the Recent Apps list too often and launching the same app after that should be avoided. Because, it is a overkill to truncate the App process then relaunch the same app in your Phone. Just Remove the unwanted app from the App recent lists.

This is very important and simple tip to SpeedUp Your Android Phone. Simply Restart your Android Phone to speed up the Phone. Press the Power Button to turn off the device and then turn on the phone. By Restarting your phone, You can stop the unnecessary background processes, tasks, clear the temp cache of the phone.

Make sure you have the latest Android Operating System on your Phone. The new Android operating System update may not come with new features but it will definetely come with Many Bug fixes, Performance Improvements. So keeping the phone up-to-date will gain some performance in your device.

Do you know any other simple tips to increase the speed of Android phones and Tablets? Share here!